Set goals and provide a sense of effectiveness, completeness, progress, and competence.

“It is not the skills we actually have that determine how we feel but the ones we think we have."

You are playing your favorite game. The challenge at hand is not too hard, not too easy. Its difficulty level is perfectly matched with your current skills. You don’t feel stressed, or bored. You know you can do it.

You are fully immersed in the game. You feel in control. You don’t expect any reward, but immediate feedback tells you are succeeding.

You have lost track of time.

After a while, the game becomes a bit too easy, and you start to lose interest. But suddenly, an enemy you have never encountered before, or a new set of skills that require some practice raises the difficulty level.

The game got your attention back. You are excited, but not anxious. You know that if you fail, you can try again.

This is what positive psychologists call “flow”. If you’ve ever heard someone saying they were “in the zone,” then they were likely describing an experience of flow. Flow can be experienced during many types of activities, including pursuing our hobbies, practicing sports as well as while doing meaningful work.

Flow occurs when we are tasked with an “optimal challenge”, where our skill level and the challenge at hand are in perfect balance.

The pursuit of challenging experiences, persistence, sustained attention and effort as well determination to improve are fueled by our need for competence. Competence describes our innate propensity to manipulate (or having an effect) our environments, develop skills and abilities, and achieve mastery.

The Self-Determination Theory (SDT) developed by Deci and Ryan identifies competence as a universal psychological need alongside autonomy and relatedness. As such it is what drives activities without need of additional extrinsic rewards, and it is essential for individuals across cultures to thrive.

White (1959) notes that it is inherently rewarding to bring about an event, whether it is turning a light on and off again repeatedly or repairing an old car. As Csikszentmihalyi (1990) puts it:

“The best moments in our lives are not the passive, receptive, relaxing times . . . The best moments usually occur if a person’s body or mind is stretched to its limits in a voluntary effort to accomplish something difficult and worthwhile”.

Closely related is the concept of self-efficacy developed by Bandura (1977), that he describes as the conviction that one will be able to deal effectively with similar situations in the future.

Self-efficacy is shaped by numerous factors, such as observing another person successfully master a challenge. However, personal experiences of mastery are the most effective way to affect our confidence. In contrast, a lack of perceived competence (e.g., failures) will decrease efficacy expectations.

Having a strong feeling of competence is not only critical in our workplace, hobbies, sports and games. Along with a sense of autonomy, internalisation of values, goals, and beliefs require that a person experience the confidence and competence to start and sustain behaviour changes conducive to health and wellbeing.

There are three broad approaches to designing environments that can help to facilitate perceived competence.

2) providing opportunities for growth and learning and 3) providing timely information and feedback.

Inducing a sense of flow by offering an optimal challenge, requires all three of these approaches.

Structure and guidance provides people with skill-building assistance. This involves setting goals and providing instructions that are clear, explicit, and understandable, rather than confusing, ambiguous, or absent instructions.

Competence satisfaction is also facilitated by situations and environments that offer the opportunity to make (and thus learn from) mistakes and failures.

Finally, information and feedback is critical to competence and progress; without accurate and timely feedback, the effectiveness of action is impossible to discern.

Feedback can be derived from the task itself – such as when fixing a computer (or not), or completing a crossword puzzle (or not). Alternatively, feedback can come from personal comparisons to one’s own past performances (e.g., either gaining or losing time on one’s previous jogging pace) or from interpersonal comparisons with others (e.g., performing better or worse than others on a test). Finally, feedback can also be enhanced with rewards.

Designers can learn how to create experiences of competence, especially from games. The perception of creating an effect within the game environment is especially high as games automatically provide dense feedback to every single input. In fact, if someone is asked why computer games are fun, a typical response might be, “because I can do something, move around, and try things out”.

Latham & Locke, who pioneered the goal-setting theory, define ‘Goals,’ as “the object or aim of an action, for example, to attain a specific standard of proficiency, usually within a specified time limit.”

Goals are the level of competence that we wish to achieve and create a useful lens through which we assess our current performance. However, all goals are not created equal.

Goals can refer to the accomplishment of a very specific result (outcome goals), to doing well by one’s own performance standards (performance goals) or to learning new skills (process or learning goals). Goal-setting theory also distinguishes stretch goals, goals that are difficult (potentially impossible) to reach and do not need to be attained. Their purpose is to stimulate creative thinking.

Goal setting is an important behaviour change technique for a number of reasons. Having a goal in mind, orients our attention and our efforts towards goal-oriented activities and away from those that are irrelevant for the goal. It also mobilises our effort in proportion to goal difficulty; and motivates us to persist in activities over time.

A goal must be clear and specific rather than ambiguous and vague. However, we’re not always good at setting clear and specific goals. At an early age, we’re taught to “try our best”.  Intuitively, this might make a lot of sense. In fact, the failure of “try your best” goals has been proven to be less effective. For example, telling someone to "try hard" or "do your best" is less effective than saying "try to get more than 80 percent correct," or "concentrate on beating your best time.

Designers have two common strategies: setting goals for their audience to follow, or allowing people to self-set their own goals. The latter increase the perceived sense of autonomy and ownership, and are therefore generally preferable for sustained engagement.

In other circumstances, however, designers can support individuals by setting goals for them to meet a certain minimum standard.

A great example of an app that gets users to commit to a goal while providing sufficient choice is Duolingo.

After signing up, users are asked to pick between four options. Setting goals as users interact with an experience for the first time is also an effective way to establish a mental model (in this case that Duolingo is supposed to use daily).

Structure and detailed guidance provide does not involve only setting goals. Clear instructions can also strengthen one’s sense of competence. These can be in the form of useful suggestions, hints, tips or guided tasks, to succeed and improve.

When it comes to digital experiences, this is especially helpful during user onboarding to help users feel competent when they interact with the experience for the first time, or when a new feature is introduced. Even more so if the app uses gestures. as users may be confused by the interface without buttons and interactive elements.

We have also mentioned that besides input, we need timely feedback to feel competent. Feedback can be given upon task completion (if not inherent to the task), as well as as people progress towards their goal.

An interesting finding is that our efforts increase as we move closer to a goal, such as we approach rewards or goals such as visual finish lines.

For example, an experiment has shown that a 10-space coffee card pre-stamped twice will be completed faster than an 8 with no pre-stamps. A recent study has also shown that people are more likely to pitch in as charitable campaigns approach their goals.

To leverage the goal-gradient effect, designers can accelerate the behaviour to progress towards a goal or reward by emphasising (and eventually creating anticipation) once one is getting closer to achieving  it.

For example, Uber not only creates an earning goal for its drivers, it also emphasises how close a driver is to reaching it.

Competence is the perception of effectiveness, and while Humans have an innate tendency to improve, it cannot be assumed; rather, the attainment of competence requires support and feedback from the environment.

In other words, we can design for competence. 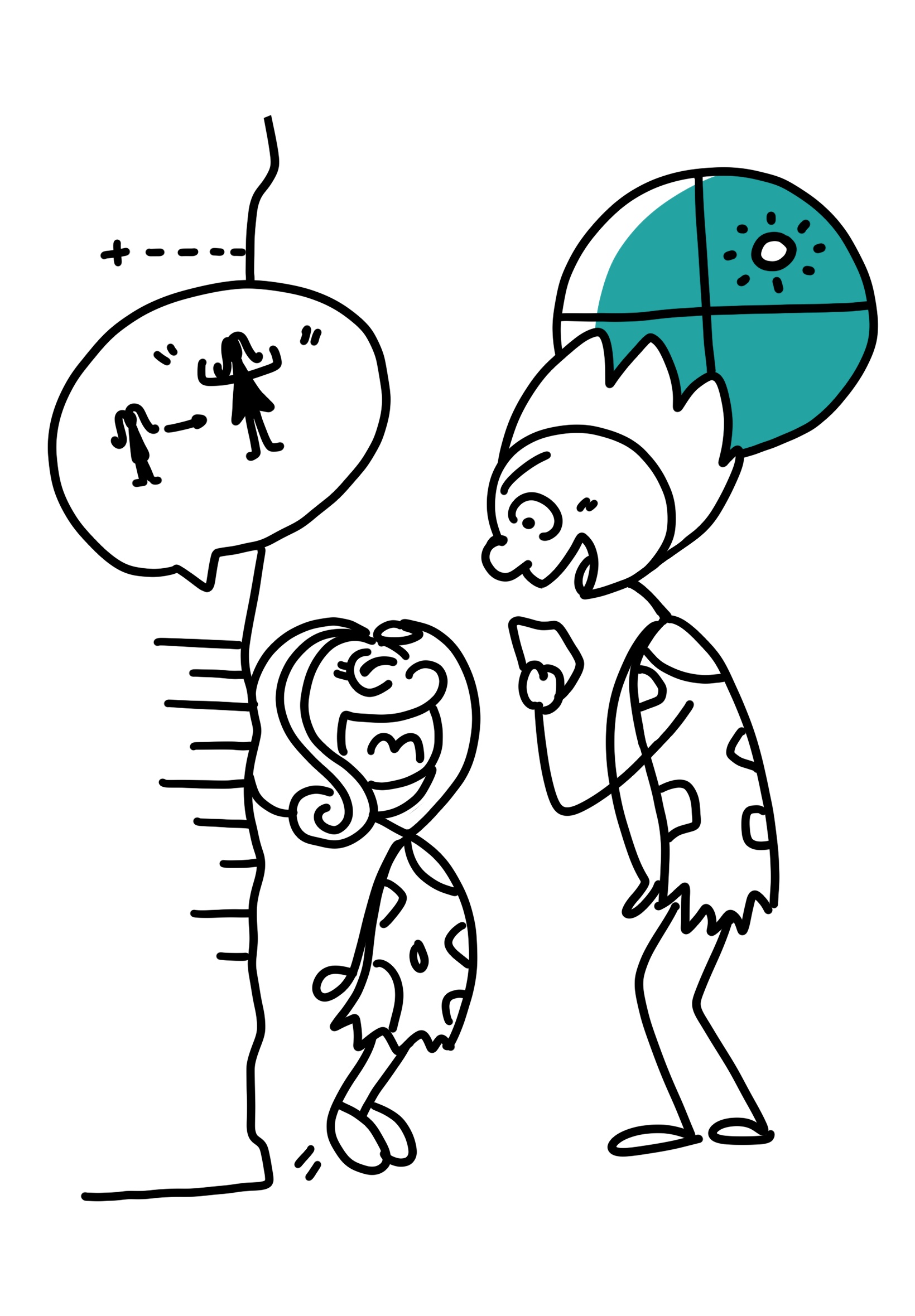 Set specific, ambiguous and possibly time-bound goals to direct one's attention and effort towards the task at hand.

Provide clear and focused instructions and suggestions to set up people for success.

The dating app Tinder uses coach marks to explain users the main interaction (swiping left and right) to match with other users.

Accelerate the behaviour to progress towards a goal or reward by emphasising (and eventually create anticipation) once one is getting closer to achieving it.

Uber not only creates an earning goal (although arbitrary) for its drivers. The copy also emphasises how close a driver is to reaching it.

New Developments in and Directions for Goal-Setting Research